The Story of Grace

The Spirit was moving at Grace Cathedral last Sunday afternoon.

About 35 people showed up for a spiritual gathering for youth that Braid sponsored with the Foster Youth Museum. Most members of the group were former foster youth, some bringing their own children. There was a car full of young adults from L.A. and a group from Fresno. Our colleagues at California Youth Connection had told us that, in their years of experience in the field, they didn’t know if there had ever been an event for foster youth focusing on faith and spirituality. The fact that these young adults traveled so far seems reflective of the need in the foster community for such a gathering that honors their faith journeys. 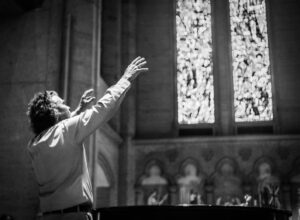 Our goal was to create an open invitation, knowing that while many of the participants would identify themselves as Christian, they likely had never been in a space quite like Grace Cathedral. Having spent a good bit of time there ourselves (especially over the last couple weeks), we know that the traditional architecture of Grace Cathedral can feel very welcoming to some, but it can feel very intimidating to others. We wanted to allow everyone to interact with the space on their own terms.

So we tried to keep the format fairly simple. After spending time in the museum, we gathered at the baptismal font, where we used the water to unite the group, asking everyone to bless each other with those waters that represent life and creation. As we were gathered there, Tramisha (one of the young women from L.A.) shared a gospel song that evolved into spirited spoken word poetry. Her voice filled the whole Cathedral and mesmerized everyone who was gathered there, including the tourists who had wandered in. Already, it wasn’t a very typical afternoon in the Cathedral…in a good way. 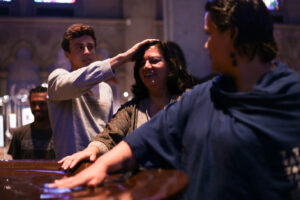 We then invited everyone to take time to explore the Cathedral on their own to see if they could find a part of their story reflected in that space. (Grace Cathedral is especially replete with art – in addition to the traditional stained glass windows, there are some non-traditional ones – like Albert Einstein – sculpture, and walls covered in murals of the history of the congregation.) After this time of exploration we re-gathered at the High Altar and were planning to sit in that space to reflect on the experience.

What occurred next was one of the most powerful events we have experienced in our ordained ministry and serving at the altar.

We had invited Ipo, a young woman and survivor of foster care who grew up in Hawaii, to bring us together by with a traditional Hawaiian chant that she had shared at the museum’s opening reception. She moved to stand behind the high altar to offer her beautiful chant, and then she shared with the group that during the past week, while she was staffing the museum, she had felt drawn to walk the Cathedral’s indoor labyrinth. During that time of walking, she said she felt compelled to prayer for the first time in a long while.

Following Ipo, several other young people came forward to speak, and we watched as those who spoke were drawn instinctively, like her, to the altar, taking their place behind it and claiming their place there. They touched the altar as they spoke – perhaps aware, perhaps not – that they were doing so. Regardless, as they placed their hands on that altar they shared their stories: stories of abuse, stories of abandonment, stories of friends committing suicide, stories of anger at God and anger at the church (at whose hand many of them had suffered abuse – physical, emotional and spiritual), stories of redemption, stories of healing. All of them powerful and worthy of tears.

We won’t say that we have never experienced such sacrificial offering at the altar, but it is a sadly rare occasion. While we don’t particularly subscribe to the classical atonement theology of the Church, the power of sacrifice associated with the altar was made real in those offerings. These young people laid their life stories on the altar and offered to God their body, mind and souls, and God accepted it all.

Such sacrifice in the context and presence of the Sacred, of the Divine, will lead to a healing of The Spirit which is profound and difficult to either quantify or relay. One can only stand in the presence of God in a state of awe and give thanks.

Throughout this experience and throughout these past two weeks that the Foster Youth Museum has been on display, we have felt in our hearts and heard expressed from others a consistent expression of gratitude for Grace Cathedral.

Our colleague and friend Jamie Lee Evans, the founder and co-director of the Foster Youth Museum, shared in a Facebook post:

“I know with certainty that those who abused and harmed foster youth, some of those experiences chronicled within this Museum, were never expecting those stories to see light. And I know with equal certainty that the survivors of those stories, some of which are brilliantly represented in Ray Bussolari’s gorgeous photography in Lost Childhoods, never expected to have their truths to be told, especially in such a sacred and powerful place as Grace Cathedral.” 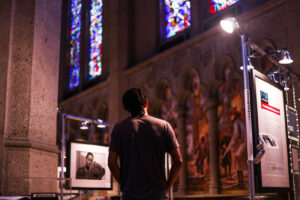 What occurred in the gracious and sacred space of Grace Cathedral confirmed all of the above.

We all, all of us who claim a part of the story of Grace, need to give thanks to God for our part in the story, the new story, the resurrected life of everyone who was part of this powerful event.

**The beautiful images in this post are the work of Jeremiah McWright, whose photography is featured in the Foster Youth Museum. See more of his photos at his website: http://www.orangemiah.com