It is not often that one receives an invitation to an 800th Birthday Party.

Before founding Braid, we both served at Good Samaritan Episcopal Church in San Diego, California, which shared space and ministry with the Newman Center (Catholic campus ministry) at the University of California San Diego. During that time, the Catholic and Episcopal communities were worshipping together during Christian Unity Week, and soon on Ash Wednesday, Good Friday, and Thanksgiving also. Over those years, our brothers at the Newman Center – Jean Paul Forte and Dominic Delay – became treasured colleagues and, more importantly, beloved friends.

And so last month we found ourselves attending the Western Dominican Province’s celebration of the Dominican Order’s 800th Jubilee at St. Dominic’s Catholic Church here in San Francisco.

As we arrived, we were struck not just by the beauty of the church but by the sheer numbers of Dominicans who had gathered for the event. Until then, we had never been in the presence of more than a dozen or so Dominican brothers, during the novices’ annual visit to San Diego. But on this day the church was filled with hundreds of friars and sisters and nuns, all gathered to celebrate the life they had committed themselves to and the mission of the Dominican Order: preaching the gospel of Jesus Christ.

The celebration had the air of a “homecoming” of friends and family gathered, brothers and sisters, old classmates there to celebrate a community, a family, a unity. It was marvelous to behold, especially seeing our brothers John Paul and Dominic in the larger context of their Dominican family. We have often heard former foster youth name the “family” they have acquired over the years – friends, teachers, and other mentors who are no blood relation but who have formed bonds of kinship. 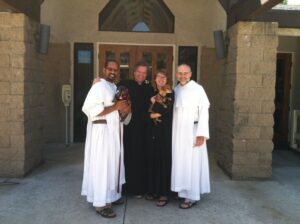 Jean Paul, Chris, Rebecca, and Dominic (and Oscar and Honeybee) at Good Samaritan

We witnessed these same sorts of bonds all around us at the Dominican celebration. We saw the faces of many people that we have come to know as friends and brothers and sisters in ministry and in life. And while we are only honorary Dominicans at best – we could never say that we have made the lifelong profession and vows of so many in that church that day – we felt very much a part of the celebration and had a feeling of great pride in the longevity of the Order of Preachers. For this closeness is the result when brothers and sisters in Christ look beyond their differences to build upon what unites us and engage in collaborative ministry of preaching the gospel to a broken world. That shared venture brings a closeness and a sense of belonging to one another that allows for you to show up to family reunions and feel as though you have come home.

That feeling of belonging was coupled with a sense of being anchored.

The sanctuary at St. Dominic’s certainly grounds one in the presence and majesty of God. But we also think it had to do with the contrast between our present life and the life of the Order. We began Braid just over a year ago. Like many new ventures, it can sometimes feel very wobbly and unsure of itself, and that first year has often felt like many more. But as Braid was celebrating its first birthday the Order of Preachers was celebrating its 800th birthday, which gave us a sense of true longevity in mission and ministry. It reminded us that God remains faithful, and we also must present ourselves faithfully every morning to the mission to which we have been called. And eventually, those little, difficult years add up to much more.

Finally, and fittingly, we were both reminded of the need for good preaching at this celebration of The Order of Preachers. Saint Dominic recognized the need for informed, educated men and women who could contemplate the truth of the gospel and preach in a way that was engaging and inviting. It was in part a reaction to what he perceived as disappointing preaching in his time. Our time is no different than his, and people are still in need of preaching that is engaging and inviting and meets them where they are with truth, the truth that God names, claims and redeems them. That message has been preached well for 800 years by our Dominican brothers and sisters, and we have no doubt that it will be preached around the world for another 800.

Happy Jubilee to our dear brothers and sisters in Christ! Thank you for inviting us into your ministry and your witness.

For Everything A Season

The Transformational Work of Listening